Hello and welcome to Only on Tuesdays! This week I will not be providing a guide on how to DM, but will instead be covering an idea for a world that I made over 2 years ago. I never had the chance to actually use the idea in a setting, but enough people enjoyed the idea of it that I decided to revisit it, and breathe fresh ideas into it. This is purely a thought exercise meant to inspire you in your games, and I hope that it can show you how versatile a game D&D really is.

The Price of Magic

Magic in Dnd has always been an extension of the character’s strengths. Either it is something that your character has learned over time to master, or perhaps it is something that the character was born with. Magic is a tool that any character can learn, and is often free of consequences.
But what if magic was a source of a character’s weakness? What if this tool that we have taken for granted in your average Dnd game actually had dangerous consequences associated with it? What if magic did not come from a source of ambiguity and mystery, and was instead powered by terrible demonic energy? And merely channeling this power can lead one to become a shell of their former selves?
In this world, magic is not something that is treated lightly. Wielding the power of the arcane is a dangerous task and one that not everyone can handle. Demons may have granted this world the power of magic, but nothing comes without a price.
Magic can be wielded by any sentient mortal willing to pay their price. Channeling the power of the arcane is enough to make any sane man go mad. Those who use the might of the arcane suffer from the effects of the 8 deadly sins. Be careful which spell you choose to cast, as the power of the sin will soon overcome you. Each school treats it’s victim differently, after all, each demon lord has their own preference for suffering.

The school of Abjuration is the school of protection. Even with its noble purpose, this has not stopped the demonic corruption from invading it. The Demon Lord Dagon has corrupted it so that upon using any spell from this school of magic, you gain a powerful feeling of discouragement that drains you of any initiative in life. Trivial tasks quickly become insurmountable and attempting to do anything is a test of both personal will and drive. You may be able to protect others with your spells, but you will never be able to protect your sanity.

The school of Divination is all about the search for knowledge. Spellcasters who choose to study Divination will desire nothing more than to simply study. What they study does not matter, just as long as they are consuming information their search can be briefly sated. It is unknown which Demon Lord initially caused the magic to be corrupted this way, but Adimarchus, the current Lord of Divination, lost both his divinity and his sanity because of his desire for knowledge.

The school of Enchantment is about the control and manipulation of others. In the hands of someone under the full influence of the sins of pride, some of the vilest and most dangerous things can happen. When one view themselves and their needs above the rights of others there is little that can be done to redeem them. The sin of pride is commanded by none other than Lolth, Queen of the Drow.

The school of Evocation is the school of destruction. There comes a particular kind of pleasure in the pure and utter decimation of the world and those under the influence of Wrath are entirely consumed by the need to destroy. The Demon Lord Yeenoghu has influenced the way Evocation magic can be channeled and has been the cause of the fall of many cities. 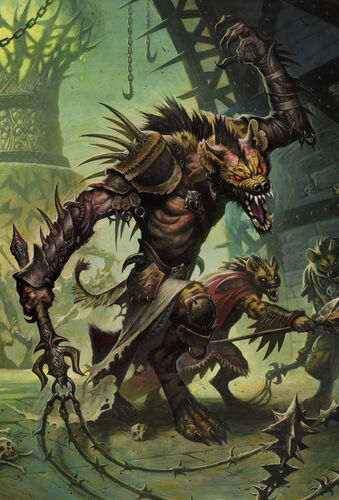 Malcanthet, Queen of the Succubi, has cursed the school of illusion to be under the influence of the sin of lust. Lust is commonly mistaken for being primarily a sexual urge, but lust actually falls under a much broader category. An illusionist who channels from this school of magic will feel an intense desire for obtaining the object of their illusion and will go insane if it is not created. This can apply to anything such as inanimate objects, animals, and yes even humans. 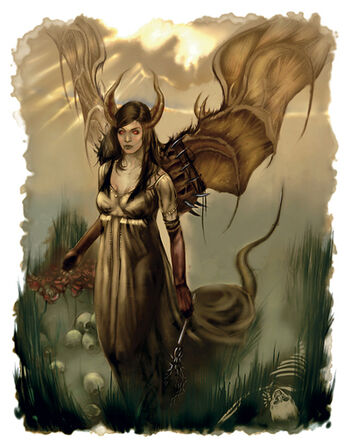 The king of Undeath, Orcus, has had a death grip on the school of necromancy since the infancy of magic. Orcus’ magic defiles the school and causes any would be necromancer to be overwhelmed with emotion upon the raising of a single corpse. Raising anybody from death into undeath will cause the necromancer to receive a vision of all of the worst memories that the person had. The only necromancers worth talking about in history, are those who had no emotions, to begin with. 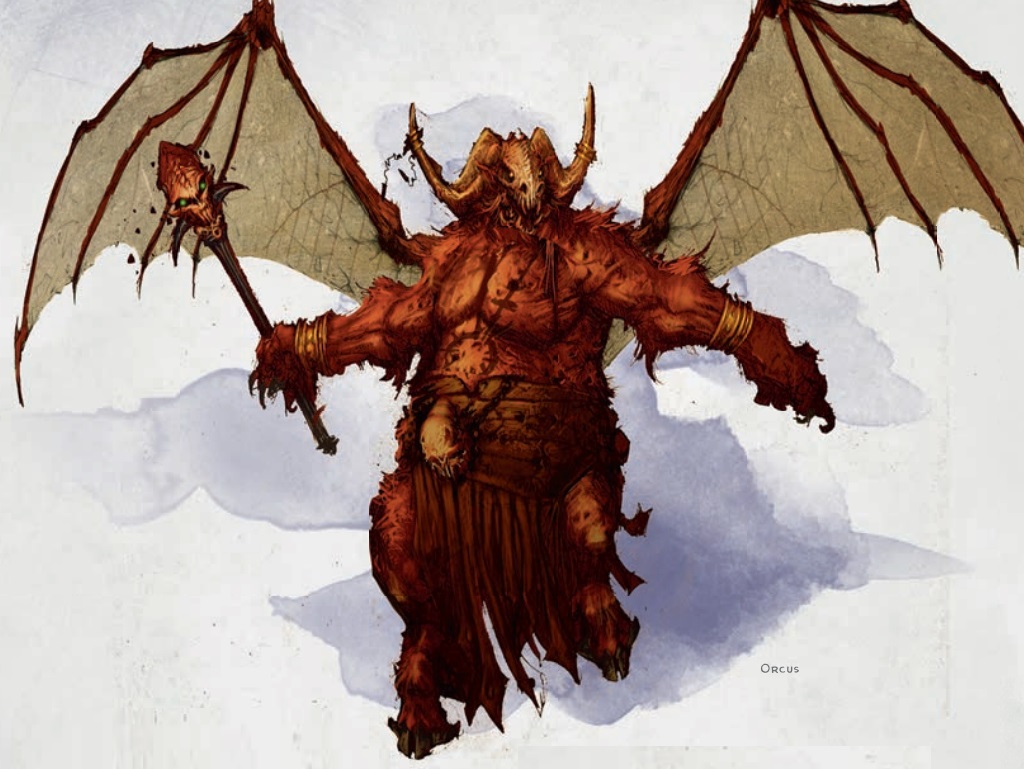 The art of converting one piece of matter into another is the oldest of the arts to not be touched by the demon lords influence. But no school of magic is safe from sin, and transmutation is no exception. Those who commit the sin of transmutation will be consumed by the curse of gluttony, desiring the waste of any objects used in the act of transmutation. Similar to lust, gluttony is often confused with food, but it is merely the desire to needlessly waste material. Jubilex’s hold on this domain of magic has been brief, but powerful, turning all of the best Transmuters in the world, into nothing more than menaces of society. 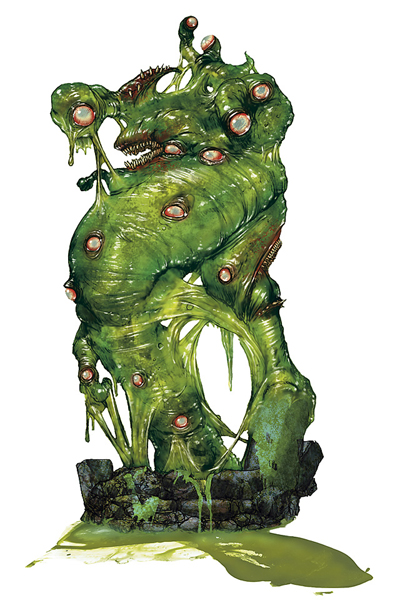 Magic is the vilest sin that any person in this world can commit. Acquiring the knowledge and power of the arcane will mark you as an outcast to society. Those who merely dip into sin will soon be consumed by it and are now an enemy to humanity. Do not fall for the temptation of magic, as no mortal can withstand it once they have tasted the arcane.

A world in which magic has corrupted all wizards would completely change the outlook upon magic. Magic is no longer a tool to be used by the fortunate, it is now a devastating weapon, wielded by the worst criminals the world has ever seen. Arcane users would no longer be seen as human, and instead as natural phenomena. Cities would be destroyed by wrath mages, hordes of undead would be commanded by emotionless monsters, and people would randomly disappear in the streets.

However, some communities may accept that magic is a necessary sacrifice in order to have better living conditions. Sure you may get incinerated by the local mage, but at least you have a clean source of water to drink from every day. Another potential avenue to consider is monks who may train for decades to resist the temptation of magic, in an attempt to help society. A party of magic users may just be a campaign about the slow corruption of their characters.

Divine magic could even have the opposite effect on casters. Instead of corrupting the caster further, it would push them closer to one of the 8 virtues. /u/magikot provided the idea for this on my previous thread, and it goes as follows:

The gods, in an effort to combat the demon lords, have made it so that magic absolutely converts, instead of corrupts. However, it’s far easier to become a master of the arcane than it is of the divine. Thus, more people fall for the false power that is magic.

I hope that this perspective on magic has given you some ideas for your campaign, or even a one-shot for Halloween. Magic in Dungeons and Dragons has always been a fascinating subject to cover and has unlimited potential in how it can be approached. If you would like to read the original thread you can find it here at www.reddit.com/r/DnDBehindTheScreen/The8DeadlySins.

News About the Blog

I have received an overwhelming amount of support for my blog in the past few months, and it is honestly something I did not expect when I first started writing about Dnd each Tuesday. I started my blog with only a couple of views each week, and now I am close to hitting 10,000 views! Because of this, I will soon be starting up a Patreon account. This will help me to provide you with more articles on Dnd, and will even give you the chance to vote on articles that you would like me to write about. I will also be providing extra content outside of the blog, such as defining the role of combat for each monster in the monster manual. In one week’s time, I will have my Patreon account setup, and you can help me to create more content to help you as a DM. Thank you for reading, and as always, have a great week, and an amazing Tuesday!