Hello and welcome to Only On Tuesdays! This week I will be discussing voice acting, and how being in character can bring your game to the next level.  There is a lot to be said about voice acting, so let us begin.

Voice acting is a very important skill to have as a Dungeon Master. It immerses your players in the game, creates memorable traits for NPC’s, and gives life to everyone’s imagination. Voices are one more tool in the arsenal of the Dungeon Master and should be adequately used to enhance your game. The power of voices comes in its ability to both be loud and over the top, while simultaneously be very subtle and discreet. A single sentence said in different tonations can have completely different meanings. Learning how to use your voice to improve your characters and scenes is something that your players will really appreciate.

One of the unique things about voices is the amount of variety that we have here on Earth. Voices come in all sorts of shapes and sizes, and just hearing one sentence from a person can tell us who they are, where they come from, how they are feeling and so on and so forth. Applying voices to your games means applying accents as well, as accents are one of the primary ways to change your voice in a distinct manner.

In order to use an accent, it is important to learn what you are using the accent for. Many times accents can serve a purpose in RPGs that will clue your players in on what they are dealing with. A person of nobility will speak very differently from a peasant. You may have it in your game that people from the north will chatter their teeth in conversation, whereas someone from across the sea will speak broken common as they are trying to learn the language.

All of these different accents are just simply what’s available in the game, using accents from real life is another very effective strategy for conveying information. British accents are typically used to denote formality and upper class, while a Southern US accent might indicate homeliness and hospitality. Every character has a story, whether they are the main villain, or are someone you had to make appear out of thin air each voice should say something about the character. A person with a raspy and gravelly voice has a far different story than the bubbly and loud personality of the next character. Choosing a voice for a character not only indicates to your players what kind of person the character is, but it also indicates to the Dungeon Master who they are and what they have been through.

One of my most effective methods for getting into character and making a voice for my NPC’s is through portraying one of their mannerisms. Doing something as simple as twitching my eyebrow allows me to get inside the head of the mad scientist who I can then portray as loud, crazy, and energetic. Tapping the table impatiently while waiting for a chance to respond, or avoiding eye contact with someone I’ve wronged allows me to nail the character’s voice more effectively when I do go to speak. Immersing yourself in the game and your characters can give you a chance to really create a believable character.

Mannerisms are also another great tool to use on reoccurring characters. When your players see you start to lick your lips they may figure out that the Doppelganger found them again. Attributing mannerisms to characters also gives your players a token to remember the character by even outside of the game. These character quirks also make it a lot easier to switch between multiple characters in a scene without losing character. By simply scratching your nose, your players will know that they are talking to the displaced wizard, instead of the Archduke of Redford.

Getting Better at Voice Acting

There are probably thousands of guides on the internet on how to get better at voice acting. Some may cover topics such as learning new accents, while others may even discuss things such as voice acting theory. Whatever the resource, whatever the subject, I would encourage you to use them, but the main point that I want to make to you is the importance of practicing your voices. Learning all of these separate and crazy voices will do you nothing if you only use them once a week at Dnd. Dnd is your chance to perform for your players, and the week leading up to it should be practice for the main event.

Finding time to practice is actually a lot easier than it may seem. Whenever you are alone or don’t care that others are hearing your voice just start talking to yourself in a different voice. It may feel weird at first, especially since society tends to condemn talking to yourself, but practicing different voices every time you drive around on an errand can drastically improve the quality of your acting. Reading the cereal box in a different voice each morning can give you the practice you need to learn the nuance between several different voices. Simply reading a book aloud and speaking for each character in the story can train your voice to handle more complex and intricate voices. Practicing voice acting does not need to take an hour-long chunk out of your day.

If you are more interested in how to apply voice acting as you DM, be sure to check out Critical Role. Critical Role is self-described as “a bunch of nerdy ass voice actors get together to play D&D”, and has professional voice actors such as Matthew Mercer and Travis Willingham on the show. Matthew Mercer is an excellent DM, and you can learn a thing or two by simply watching him DM. The show recently finished and makes for a pretty exciting campaign to watch if that is your thing. 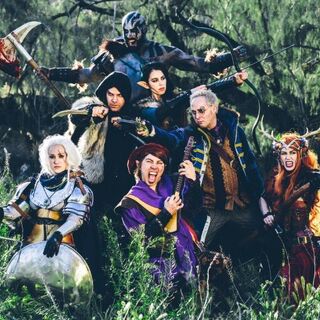 Voice acting is a skill that can really change the way you play once you begin to incorporate it. It may seem awkward at first, but the amount of realism and depth it can give your game is well worth any feelings of doubt you may have. Adding mannerisms and really getting into the character that you are portraying is an excellent way of making your game pop and come to life. And practicing every now and then throughout your daily life can really bring your voice acting to the next level. Thank you all for reading this post, and as always have a great week and an amazing Tuesday!