No Dnd world is complete without a few badasses who are in charge of everything. The headmistress of the ancient mage academy, the wizened old fighter who has slain 13 dragons singlehandedly, and the necromancer who threatens to rule the world. Having extremely powerful NPC’s is both fun for the DM and the players, and creates a world that is more believable and entertaining. Being able to interact with these nigh-omnipotent figures is an incredible aspect of Dnd, and gives the players a goal to aspire to and become great themselves.

However, these ultra-powerful figures can be hard to handle, as they can severely unbalance the campaign if left unchecked. If the headmistress were to go on a single adventure with the party of Level 5 characters, she would completely dwarf them in scope and power and make the session no fun for the players. A villain who is nearing demigod status, and is intended to be the endgame goal of the players, is someone who will rarely interact with the players in any serious fashion, as doing so will mean an easy total party kill (TPK). Today I am going to offer some tips and tricks on how to incorporate ultra powerful figures into your campaign, without upturning the balance of the world.

Giving the players powerful allies is one of the coolest things we can do as a DM to help the players. When you tell them that an Ancient Gold Dragon is on their side they will feel invincible. But the problem lies in the fact that this ally, is someone who can realistically never join the party. If you have to start throwing demons at your players to make the encounter more challenging, one swipe later and an unlucky party member may have to start rolling up some new stats. But this doesn’t mean you can’t introduce powerful allies to the party, you just have to think it through first. 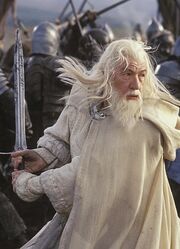 One of the most iconic examples of a powerful ally done well is Gandalf in Lord of the Rings. Gandalf is clearly the most experienced member of the group and was much stronger than everyone else there. And yet despite Gandalf’s immense power, he plays a very small part of the story. There are 2 reasons for this. First Gandalf had other more pressing concerns to deal with. In the Mines of Moria, the party encountered the Balrog, a demon that would wipe the party. Had Gandalf not intervened, and told the party “Fly you fools” we would have had a much different series as a result. Distracting the overpowered character with a task that only they can do can keep them out of the parties way.

The second thing is that his goals are slightly different from what the parties goal is. There are many different ways to make their goals different yet still in line with each other so that they are allies. In the case of Gandalf, he could not have the direct goal of “Bring the ring to Mordor” as he is physically incapable of that. Instead, Gandalf had similar motives that were in line with what he wanted to happen. Gandalf wanted to defeat Saruman, and then he wanted to save Gondor, doing all of this to create a powerful distraction so that Frodo and Sam could deliver the ring to the volcano. He never directly helps the party members, but indirectly helps them by achieving goals that still aid the party in their quest.

The direct opposite of the ally is, of course, the villain, and making these characters the most powerful beings in the world is part of the fun. But we come across the same problem where these ultra-powerful characters are too much for the party to handle, and so this villain that the party was supposed to be hating since day one, doesn’t get to have any true interaction with the party. You can’t create someone who kills anyone who displeases them and then introduce to them the party, as they will inevitably become displeased with them.

Fortunately, dealing with powerful villains in relation to the party is much easier than dealing with allies. The first thing you can do with a villain that is extremely powerful is to never let the party ever directly interact with them. Sauron’s presence in the Lord of the Rings trilogy is limited to the point where the party defeats him without even encountering him. By using surrogate villains and armies, you can still have the villain be a massive threat of the campaign, without putting the risk of a TPK on the line every time the players have to interact with the bad guys.

Another way to handle the party full of weaklings is to show the party that there is no way they can directly take on this kind of villain yet. Warning them at how powerful the villain is is largely going to be ineffective, as they will just choose to charge right in anyways. Instead of telling them the villain is dangerous, show them the villain is dangerous through other methods. Show the aftermath of a town after the villain swept through, introduce a powerful ally and then have the villain tear them to shreds, or even have the villain beat them within an inch of their lives in an attempt to humiliate them. And if none of the above methods work, feel free to kill your players the next time they choose to travel to their castle and taunt the villain. If they do not understand the gravitas of the situation after you have given sufficient evidence to suggest otherwise, they deserve to roll a new character. But only do this if you have sufficiently warned them, otherwise the players will feel like their deaths were cheap.

Handling powerful NPC’s is a daunting prospect. The amount of unbalance they can bring to a campaign can be staggering if not done right, but the reward of doing so is very much worth it. Handling powerful allies usually involves distracting them sufficiently so that they don’t get tangled with the affairs of the party while dealing with powerful villains usually involves convincing the party to stay away from them until they are ready to handle them. How do you guys handle your powerful NPC’s? I’d love to hear what everyone has to say in the comments below. Thank you all for reading, I hope you have a great week and an amazing Tuesday!