Every year for the past 8 years, hundreds of cards have been added to the Modern card pool. As a format gets older and gets more cards added to it, it is inevitable that the format will become faster. Back in 2011 when Modern was created, the gold standard was to kill on turn 4. Anything that was consistently faster than turn 4 got banned, and for a while, Modern was in a fantastic place. As of late, however, Modern has sped up quite significantly and has become a format where turn 3 kills are commonplace, and turn 2 and 1 kills aren’t unheard of. The past 8 years have provided us hundreds of cards that threaten to end the game as soon as possible, while the answers haven’t been able to keep up. With Modern Horizons promising a batch of cards made fresh for Modern, my one hope is that the answers they print in Modern Horizons are better than anything we have ever seen.

Modern has been plagued with the problem of having threats that are significantly better than any answers that are available. Every set it seems there is a brand new card that improves or even spawns a brand new archetype that can be seen as degenerate, while the answers for these decks are made with Standard in mind. With a card pool as deep as Modern, it’s a lot easier to break things than it is to provide answers. After 8 years of good threats and mediocre answers, we have gotten to the point where the answers that do exist are often too slow to compete.

The greatest example of this would have to be in countermagic. The cheapest unconditional counterspell available in Modern is Cancel, which is one of the worst cards in the format. In a world where cards such as Karn can be cast on turn 3, losing the coin flip means you lose the match. This is true for a lot of cards in Modern. Blood Moon is one of the best answers for big mana, but many decks don’t even play it because turn 3 is just too slow. This efficiency problem is one of the main reasons why unfair decks dominate Modern. The best answers for many of the top decks in the format were designed with Standard in mind, while the degenerate decks form from piles of cards that were never intended to be played with each other.

I believe that a good example of answers that are powerful but can still be played around is in graveyard hate. Cards such as Rest in Peace, Surgical Extraction, Relic of Progenitus, and Leyline of the Void can all be played before the critical turn of 3 and are impactful enough to slow down the goldfishing player and have them think about what they need to do. And if none of these options are appealing to you and your deck, there are dozens more to choose from. This allows busted graveyard decks to show up from time to time such as Dredge, Bridgevine, and even Izzet Pheonix to an extent, and still be able to be checked by the answers.

Part of the reason graveyard hate is so effective is because of the variety of options that are available. Whether you want to play Surgical Extraction, Tormod’s Crypt, or Rest in Peace is up to you and gives the unfair deck more cards that it has to play around. One common theme I see among many of these degenerate decks is that they can pack 4 Nature’s Claims in their sideboard and comfortably answer anything their opponents play to slow them down. Answers are very often centered around enchantments and artifacts, which makes it very easy for these decks to play around their checks. With most of these answers costing 2 or more mana, Nature’s Claim can give a huge tempo swing to the degenerate player. For decks like Tron and Hardened Scales, Nature’s Claim is the only card you need to deal with all of the cards that answer your deck.

Dredge on the other hand has a lot more effects it has to worry about. Having answers on multiple card types makes it much more difficult to effectively answer everything, giving fair decks a chance at slowing down their opponent and winning the game. Fair decks have always struggled with having enough sideboard slots to deal with multiple unfair decks. Degenerate decks only have to devote a single card to deal with their answers. By adding in more card types with answers printed on them, you force the degenerate deck to have to stretch their sideboard more thinly. Instead of 4 Nature’s Claims to 2 Rest in Peace, the degenerate deck will have to play 2 Nature’s Claims and 2 Lightning Bolts, making it more likely that the Rest in Peace actually does stay in play.

Fair decks have always struggled with having enough sideboard slots to deal with multiple unfair decks. Degenerate decks only have to devote a single card to deal with their answers. 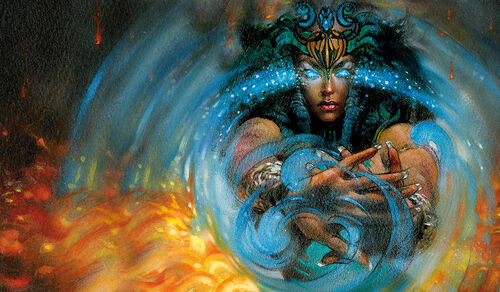 As important as answers are to a format, I do not want the answers to be better than the threats. In a world where the answers are better than anything else, we start to lose one of the main appeals of Modern. Getting to have busted turns, where your opponent gets to sit back and realize how they are screwed, is a key feature of multiple Modern decks, and would change the feel of the format if these decks are hated out too easily. I don’t want to see cards like Force of Will in Modern, but something as simple as Counterspell will still go a long way. Thank you all for reading, I hope you guys all have a great week and an amazing Tuesday!