Dnd is always described as having 3 pillars of gameplay. Those 3 pillars are combat, roleplay, and exploration. For many DM’s the first 2 pillars are easy to make fun, all you need is an interesting monster from the manual and a quirky NPC. But the third pillar eludes us and is difficult to achieve because the way to make exploration fun isn’t as clear. If we choose to look outside of the Dungeon Master’s Guide, we can find a different type of game that makes exploration fun in the video game genre of Metroidvania’s.

What Is a Metroidvania

Metroidvania’s are a video game genre that is all about exploration and growth as a character. At the start of the game, you have a very small part of the map you can explore and as a character you are very slow and weak. But, as you explore you will discover magic items and powerups that will grant you new abilities that will then let you explore new locations. Some popular examples of Metroidvania’s include Super Metroid, Castlevania, and more recently in Hollow Knight.

Metroidvania’s have pulled many key concepts from Dungeons and Dragons into the core gameplay loop of their genre. Exploring new areas gets you more abilities and magic items which in turn lets you explore new areas. This loop is what makes Metroidvania’s possible, and is a concept derived from Dnd. When you get the spells Water Breathing and Fly so many more places become accessible, which in turn grants the ability to find new treasure and get more experience.

Metroidvania’s make exploration one of the most fun aspects of the game, whereas in Dnd exploration is often handwaved until the players are at the next fight. (I’ve been guilty of this myself). Exploration is defined as one of the core pillars of Dnd, but the number of articles and videos on it pale in comparison to content about making combat or roleplay interesting. The reason I bring up Metroidvania’s is because they provide a very simple formula that can make exploration one of the most engaging aspects of gameplay. 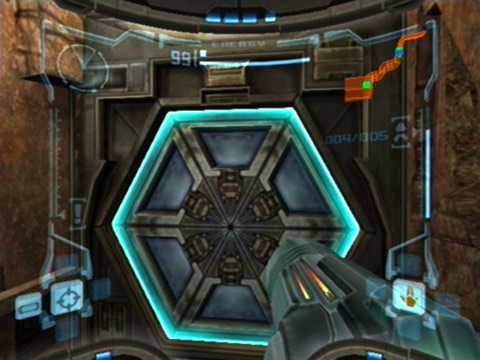 Metroidvania’s provide a massive world to explore, and if they aren’t careful this can create a case of decision paralysis where the player has no idea what to do. Metroidvania’s get around this problem by creating locked doors that the player can’t progress past until they get the item or ability they need to pass it. These locked doors can come in many different shapes and sizes, such as a ledge that is just barely out of reach, a tunnel that is too small to crawl through, an enemy that is too hard to kill, or even a literal locked door.

These locked doors effectively shrink the map down to a much smaller size until the player has the tools and skills to progress past this barrier. The idea is once they get their new powerup they’ll immediately think of the obstacle they couldn’t get past before and attempt to overcome it. However, it is easy to forget previous barriers that they couldn’t get past before which is why it is important that you create a sense of mystery around the obstacle. What if on the ledge they can’t reach, there is a shadowy figure, in the tunnel, there is a giant stash of treasure, and behind the locked door are the sounds of heavy breathing and chains shifting around. If you can make your locked doors memorable, the players will be running head over heels the moment they get an item that can let them past it.

Backtracking is something that we don’t have to deal with as DM’s because it is extremely trivial to just say “you arrive” and handwave it all away. Video games, on the other hand, don’t have this luxury as the player wants to be in control as much as possible, and part of the fun is the journey. So, when the player gets to the end of a tunnel, they have to turn around and go back through it all. Video games have learned how to make this fun by making the path back different than the way in.

A good example of this would be having to explore the dungeon stealthily the first time you go through it, but on the way out an enemy spots you and the scene shifts to action. This change of pace can make backtracking unique, and will actually reward the players for learning the area rather than making it meaningless. By introducing different styles of play, or even different monsters as the players make their way back you can keep backtracking interesting without having to resort to handwaving your players to the destination. Another classic example of this is by having the dungeon collapse on the players as they try to escape, a staple of the Metroid franchise.

New Locations Should Be Breathtaking

The players are going to put a lot of effort into discovering the new part of the map. Reward them by making that area as breathtaking as possible. A Metroidvania can struggle when the new section the player begins to explore looks and feels the same as the section they just left. This can make the environment feel dull and samey, and when the player encounters a locked door they may struggle to realize where that door even is.

Hollow Knight excels at making new locations amazing, and very much worth the wait of getting to. One of my favorite locations in the game is the Crystal Peak which is a mine that is filled with enormous pink crystals. The sounds of mining can constantly be heard in the background and massive mining lasers threaten the player every other corner. This location could have easily been a simple mineshaft, but they decided to make it unique and because of that, it was worth exploring. If you are struggling on how to make a location unique, try your best to make it worth your players visit through other means such as treasure or npcs. You want to reward your players for exploring.

Good locations will also tell a story without having to say a single word. In the Crystal Peaks all of the enemies you find there are constantly digging away, and don’t change course until you arrive. These bugs have gone crazy for one reason or another, and all they know now is to dig. Another example of a locale telling a story would be the crashed alien ship in Super Metroid. It doesn’t have a single line of dialogue explaining what it is, or why it crashed, but by exploring the player can come to that conclusion themselves. This follows the principle of “show don’t tell” which is why it is so much fun to explore. What if when the player first moved into the ship a popup appeared with all of the information about the ship? All sense of mystery would be lost, and the ship would lose its allure.

Metroidvania’s are a very deep genre that have many lessons that Dungeon Masters can learn from. Other video games can also provide many lessons to us, even something as simple as Mario, which is why it is important to always be on the lookout for things to learn. Metroidvania’s have perfected the art of making exploration fun, and are a valuable asset when it comes to Dungeon Design. Thank you all for reading, I hope you have a great week and an amazing Tuesday!

One thought on “How Metroidvania’s Make Exploration Fun”