I’ve been told that dragons are nothing better than big, dumb, idiot lizards who can fly and have a breath weapon. This series was started in an attempt to dissuade that notion, and show that when a dragon is used to the fullest of its abilities, it can be a terrifying force of nature. Let’s start by discussing the psychology behind playing a dragon. If you’ve read my previous posts, feel free to skip this next section.

The Minds of the Vicious

Dragons are not claw/claw/bite creatures and should never rush blindly into a battle. They are dangerous enemies and your players should be afraid of them the same way they are afraid of Beholders, Mind Flayers, and Medusas. The common attribute of the 3 previous enemies is that their intellect is a key component of their danger. Dragons, due to their massive pool of hitpoints and powerful physical attacks may be treated as a bag of hitpoints that can quickly keel over given enough firepower. With the action economy of 5th edition, it is very easy for a dragon to get overwhelmed. When your players see a dragon, they will not hold back and neither should you as the Dungeon Master.

A dragon’s main goal in any battle should be to isolate the individual members of the party. This means the battle may begin far before you ever pull out the battle map. Dragons have many special abilities associated with them that they can use to separate the party, but one thing that is common amongst all of them is their grapple attack. It’s not on their stat block but with their massive strength modifiers they can easily grasp a Wizard in their claws and drag them through any hazards far away from the help of the party. Drop them from a few thousand feet and see how they fare.

Now I would like to talk about the psychology of the DM who decides to use a dragon. When you pull out that miniature your intent should be to kill. I myself am very bad at actually killing my players, but if I want the group to fear and respect my encounter then I need to do everything in my power (and within the rules) to kill them and I should feel no remorse for acting out the intentions of these creatures.

Blue Dragons are the most arrogant of the dragons, but this doesn’t make them stupid. Blue Dragons are wickedly intelligent and will use whatever tactics they have at their disposal to deal with the players. Blue Dragons primarily live in the desert and carve their caverns using their lightning breath and burrowing skills. This burrow skill is an invaluable part of the Blue Dragon’s moveset and allows them to escape in a way that your players likely won’t be prepared for.

When building a Blue Dragons lair keep in mind the verticality that is possible. Their lairs should closely resemble an ant colony, except with the added advantage that flight gives them. Long shafts with a hard bottom don’t concern a creature that can scale walls and fly. While crystallized sand sounds like it won’t be able to hold the weight of an Ancient Blue Dragon, keep in mind that we are already pretending that big lizards with lightning breath and flight are possible. 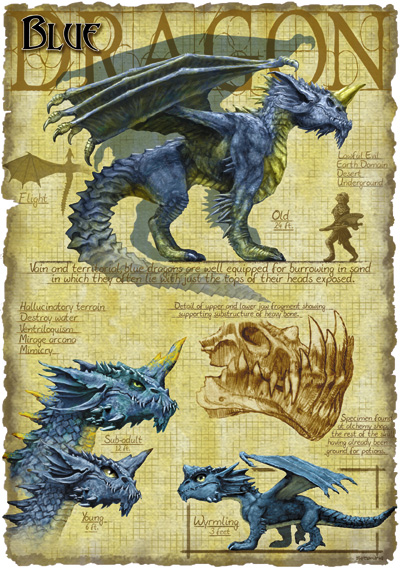 Blue Dragons will fight on their terms whenever given the chance. These terms include flying far out of reach of the party, electrocuting them, and flying away when the party poses a threat and to recharge the lightning breath. This can take hours or even days and should wear out your party physically and mentally. If the party is able to stumble upon the dragon’s lair, it should have no compunctions with bringing the entire lair down on their heads. 20d6 worth of damage later, it can come back, rebuild it’s lair and see what sweet loot the players have on them.

Blues may not be willing to collapse their lairs immediately, however, and may try to fight the party as they invade. If this is the case the following lair actions can be used to isolate the individual members of the party and make them easy pickings.

This is a simple lair action that can completely incapacitate a target if they fail the DC 15 Dex save, and can take them out of the battle for a turn. Targeting a wizard that is focusing on buffing someone else could take two threats out at once. If another character has to stop what they are doing to save their friend, even better. Because the saves for the move are pretty easy to succeed, 15 Dex and 10 Str, focusing on the character with the weakest physicals could give the dragon a huge edge in the fight. If the dragon so chooses, they could also dive in the sand and viciously attack the character who was knocked prone and would get advantage on all their attacks.

This move breaks line of sight and is much more effective at taking out ranged characters than the ceiling collapsing. This move can also take out multiple characters at once which is great if the party is all clustered together. Getting them to spread out can also give the dragon a chance to grapple one of them and burrow through the wall, isolating them from the rest of the party. While this move is less likely to invalidate entire turn cycles like the ceiling collapsing can, it has a much lower floor than one character succeeding a simple Dex save.

This move has the least utility out of all the other lair actions on this list, but it can still serve an important purpose. Dropping this on a character will force them to use their move action but that’s not the most interesting use of the ability. What I’m intrigued by is putting this up to make the players think that they can’t traverse through the dragon’s lair as easily. If lightning springs up in front of the player, and you don’t tell them how much damage it’ll do, they’ll try to find another way around it. This is an effective way to corral the fighter where you want them to go, but if they knew that it was only 3d6 they might go through it anyways to position themselves more favorably.

A Blue Dragon keeps the secret of his/her lair intensely guarded, and will very rarely allow anyone inside, even if they are a close ally. However, if anyone is starting to get close to the lair they should experience the following effects.

Setting up camp isn’t as easy as putting up a tent. With fierce thunderstorms constantly going on, no place within the 6-mile radius should feel safe. The dragon can also take this to their advantage, using the veneer of the thunderstorm to hide the fact that the party is being directly targeted by the dragon. They’ll chalk it up to the storm being unusually lucky at targeting their campgrounds until it is too late.

These dust devils should be more of a nuisance for the players if they are at a level that is capable of killing a dragon. However, these air elementals can still serve the purpose of draining resources from the party. Every Fireball spent on the creatures outside is one less Fireball that is targeting the dragon. There are more than just dust devils outside of the lair. The players will also have to contend with Ankheg, giant scorpions, and other creatures of the desert that the dragon chooses to keep near.

These can be huge roadblocks for a party, especially if they are actually in the lair itself. If the fighter tries to engage with the dragon and falls 30 feet in a hole, they aren’t coming back out anytime soon. By the time the party does arrive at the lair, they should be aware of the threat of sinkholes and should be able to play around them. But the dragon should also be aware of the weaker parts of the ground in his/her lair and can use it to their advantage when they slam a character.

Now it’s time to take all of the above elements and combine them into a 6-mile wide hex that will antagonize your players for sessions to come. Blue Dragons live in the desert, which by itself, comes with a whole host of problems that the players will need to account for when they start traveling here. Once the party gets close to the lair, they will have to contend with raging thunderstorms and a whole bevy of monsters, with the occasional sinkhole throwing off their strategy.

If they are able to brave the desert and the storms, they will find a beautiful crystalline cavern that will be difficult to traverse without claws and wings. If they can find the treasure room, it will be littered with sinkholes that the players can’t easily see. Gems of all shapes and sizes will adorn the cavern and dust devils will spring to assistance at the first sign of danger. If the dragon ever perceives that the party is too dangerous, it will not hesitate to collapse the entire lair on top of them, and they won’t have a magic rug to escape on.

Dragons should never be an enemy that is considered boring. They are the face of the game for a reason and have so many abilities available to them that allow them to truly terrify the players. Playing a dragon intelligently is a difficult task with 4-6 brilliant minds facing you alone. Utilizing the lair effectively can help give a dragon much-needed oomph for when you need to show your players that dragons are not just big, dumb, idiot lizards. Thank you all for reading, I hope you have a great week and an amazing Tuesday!

The light from your torches dances across the crystalline walls, illuminating the dragons lair. Gems from different ages and kingdoms lie scattered across the ground as massive stalactites block your vision. The sound of a raging thunderstorm can be heard outside as a crack of lightning shakes the entire chasm. As you regain your step, you see in the reflection of the crystalline wall the azure blue scales of the dragon you’ve been hunting, and the light of white-hot lightning building up in its chest.

4 thoughts on “Lairs of Legend: Analyzing the Lair Actions of Blue Dragons”