If you would like to see this deck in action, be sure to check out this league I did with the deck! https://www.youtube.com/watch?v=7w9bAFgbVEM

For the past year, I have been playing zombies. I began playing zombies at the twilight of last standard season, right before Shadows over Innistrad and Eldritch Moon rotated. I really enjoyed the deck and was sad to see the cards go. Even though a lot of the deck rotated, I decided to stick with zombies. I played around with a few different versions of the deck and chose to bring UB Zombies to GP Atlanta. I did alright and went 4-5 at the tournament, and learned a lot about the tribe. I chose to cut the Scarab Gods and go straight mono black because at the time I believed it was the best way for the tribe to go. 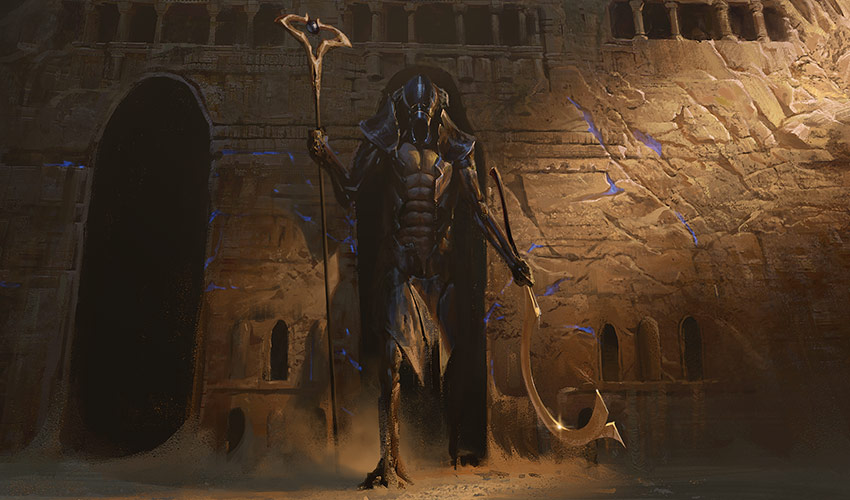 M19 spoilers began, and I was pleasantly surprised to see several new zombies get printed! Cards such as Death Baron and Graveyard Marshall looked like powerful new additions to the deck, and could potentially bring the deck back into the tier one spotlight. Many people were excited about the deck, and immediately lists began popping up everywhere. However, a lot of the lists that began popping up were not lists that I agreed with. Cards such as Josu Vess and Plague Belcher were hardly a consideration in place of cards like Scrapheap Scrounger which don’t even fit the deck as far as I’m concerned. Cards such as Wayward Servant and Metallic Mimic seemed like much better inclusions. A mono black list with Metallic Mimic would probably be very successful, if not for the presence of Chainwhirler in the format.

I went back and reevaluated why I have chosen not to play white in my list for the past few months. When I first made the deck back in November, the reason I chose not to play white is that at the time, having white in the mana base was a much harder thing to do. The only duals available were Concealed Courtyard and Unclaimed Territory. In order to splash for cards like Wayward Servant, you had to play a lot more basic plains which was hard for the deck to do. Now we have Isolated Chapel thrown into the mix, allowing us to splash for white without throwing off the manabase.

Another reason to play white is in the catch-all removal it provides in Cast Out. Being able to hit cards such as God-Pharoah’s Gift and Arguel’s Blood Fast are really helpful in the current meta. Splashing for white also helps us win in the zombie mirror, with the addition of Binding Mummy to tap down opposing creatures before combat. Combine that with Graveyard Marshall, and you can save yourself 12 life from that opposing Ghalta. White, while previously a bad addition to the deck, seems great in this current meta, and can provide a powerful and versatile main deck with plenty of great options to choose from.

Here is the list that I am currently on: https://www.mtggoldfish.com/deck/1207496#paper

Cards that I am playing

I am really surprised this isn’t seeing play. For a long time, zombies was lacking a powerful option in the 4 drop slot, and this knight fills it perfectly! A 4/5 Menace beater is already great, and it growing bigger for each lord you play really puts your opponent in a tough situation. Menace is an often overlooked keyword, letting this thing attack through random tokens and Gearhulks as if they aren’t even there. And if that isn’t enough, this card is fantastic insurance against Settle the Wreckage. Sure you may have wiped my whole board, but I’ll just redeploy an even bigger army led by this badass lich. Josu Vess deserves far more play throughout Standard in general and has a perfect home in this deck.

This card is much better than people give it credit for. It may be another 3 drop in a deck that is glutted with them, but I believe that Plague Belcher well deserves its place in this deck. A 5/4 with Menace on turn 3 is a nightmare to deal with, and Plague Belcher happens to line up really well with most of the removal being thrown around currently. For starters, it dodges Abrade, unrevolted Fatal Push, Magma Spray, Lightning Strike, and even Chandra as long as there is one lord out. Its second ability is not to be scoffed at either, providing a powerful deterrent against board wipes, and negating any benefit off of cards like Fumigate. This card was the all-star of my deck before M19, and I expect it to remain a powerful contender in this Standard.

Many of you have probably forgotten that this card even existed. A 6 mana sorcery that makes a few tokens seems underwhelming on its surface, but this card is the real deal. 3 zombie tokens don’t seem like much until you realize that there are 3 different effects on the board that are pumping your zombies, turning these measly 2/2’s into huge 5/5’s. The ability to cycle on this card is also really great to have for 2 different reasons. If you get stuck on lands and can’t find that 5th one to cast Liliana’s Mastery, there is no shame in cycling this and getting yourself a token for your troubles. Another reason why cycling is great is that it provides a way to get through countermagic. While Stir the Sands may seem too slow, I can guarantee you that this card is great in this deck, and will win many matchups.

Cards that I am not playing

Liliana is a card that literally reads “play me in a zombie deck”. While seeing that on a mythic usually means good things, Liliana is quite the disappointment. Her +1 does nothing to affect the board, and isn’t even guaranteed to deal 2 damage. Her -2 only affects the board if you are already ahead, and her ultimate, while great isn’t enough to make this worth it as your 4 drop. I’ll be sticking with her brother Josu Vess as that card is actually terrifying to play against.

Another draw to playing white, In Oketra’s Name seems like a great addition. A Inspired Charge for 2 mana is a bargain deal, and it can significantly change combat math. My only issue with this card is that Inspired Charge does it’s best, when you can do more than one creature per turn. The curve of zombies at the moment facilitates one creature at a time, leading to powerful individual creatures, but not a wide enough board to abuse In Oketra’s Name to the fullest. This card can also be quite awkward when this is your only play on turn 2. If there were ways to produce tokens ala Diregraf Colossus, I may reconsider this card.

Contempt is a fantastic card, don’t get me wrong. I have played it in the past, and anticipate playing it in the future. However, Cast Out hits just a few more targets than Contempt and also has the added benefit of cycling. We don’t normally care about creatures as we will typically have the largest creatures on the battlefield. Cast Out hits those problematic permanents, and while it can be destroyed, it provides more flexibility for the same price. Also, it’s significantly cheaper which is nice for people who want to play this deck.

Zombies are a pretty straightforward archetype. You play your cards on curve, make your zombies larger than anything else, and smash in for a ton of damage. However, there is much more to this tribe than what is apparent at first glance and specific cards can do a lot for this deck. I have been playing zombies for almost a year now, and I am happy to say that M19 brought some powerful additions that will bring the deck into the limelight again. If you would like to see this deck in action, be sure to check out this league I did with the deck! https://www.youtube.com/watch?v=7w9bAFgbVEM. Now go forth my fellow necromancers and raise the dead to do your bidding. I hope you have a great week, and an amazing Tuesday!