I like designing Standard decks around what archetypes are represented in draft. A Simic deck likes to have +1/+1 counters and a Boros deck likes to be fast and aggressive. All the way back in Dominaria, there was a draft archetype based around legends. Arvad the Cursed provided a huge incentive for anyone drafting legendary creatures, and with other cheap and powerful legendaries like Danitha Capashen, this strategy could be a huge threat if successfully drafted. With a +2/+2 boost to all legendary creatures, Arvad seemed like a perfect card to build around in Standard.

There are a lot of legendary creatures that are available in this Standard, and many of them become a lot better when paired with Arvad. Captain Lannery Storm is a 4/4 that can also help to cast the many expensive legendary creatures in the deck. Verix Bladewing effectively gets a +4/+4 boost from Arvad when he is kicked and Demonlord Belzenlok can draw tons of cards when he is cast as the majority of the deck has a CMC of 4 or more. One trend that I started to notice, however, was how many angels there were that were also legendary creatures. 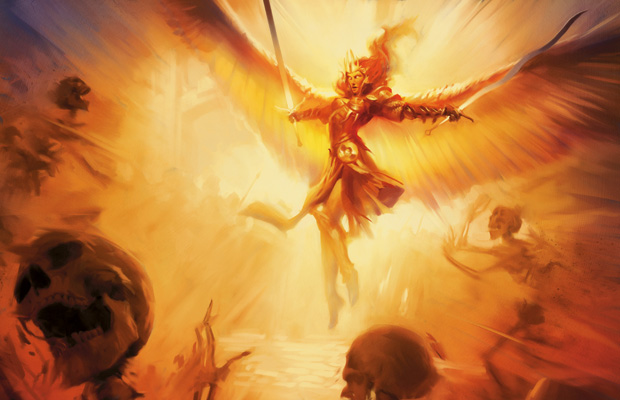 With Lyra Dawnbringer we can have 2 lords that provide immediate impact when they hit the battlefield. Following up your Aurelia with a Lyra means swinging in with a 5/6 flying, mentor, trample, vigilance, lifelink. Shalai, Voice of Plenty is another legendary angel who keeps the heat away from the all-stars Lyra and Arvad. With all of these Angels, Dragons, and Demons you can slap a Blackblade Reforged on them and send them flying into your opponents face.

One struggle that these kinds of decks can have is if they don’t curve out they won’t do well. Having so many legends also poses a problem in having multiples of the same legend in hand. However, this deck is perfectly poised to take advantage of one of the best cantrips in Standard in Board the Weatherlight. 5 cards gives you a lot of options, and lets you choose the right legend for the moment. And for the decks that run non-legendaries like Tempest Djinn and Hydroid Krasis, you can Cast them Down for daring to stand against your legends. Thank you all for reading, I hope you have a great week and an amazing Tuesday!